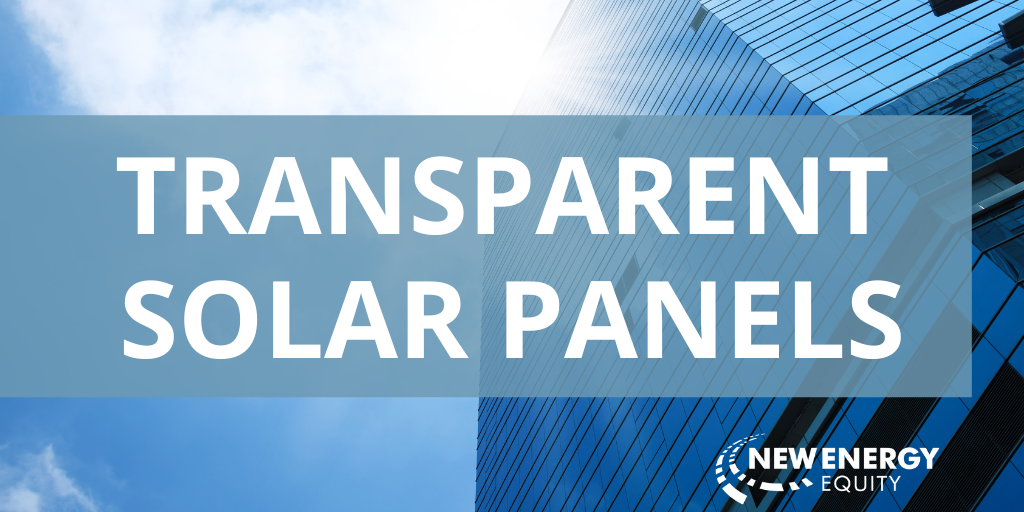 Solar irradiation is one of the most abundant and readily available sources of renewable energy we have available to us. The development of silicon-based solar panels allowing for the capture and conversion of this energy into usable electricity was a huge scientific breakthrough. However, there are several obstacles to solar technology becoming more integrated into our societies’ energy infrastructure. One of these obstacles is the fact that traditional solar panels are opaque, and installations require large amounts of space, and the installment of such panels in public places can be aesthetically undesirable.

The creation of a transparent solar cell (TSC) would be a monumental step in solving this issue and would allow solar technology to be incorporated almost seamlessly into our daily lives. Imagine if every transparent glass surface contained a working solar cell – windows on residential and commercial buildings, automobile windows, and screens on personal electronics – the applications for transparent solar technology are diverse, abundant, and applicable worldwide.

The advent of this technology is quite recent, with the concept of a TSC being invented by a group of scientists at MIT and Michigan State University in 2010 [1]. Since then, the world of TSCs has expanded to include several differing technologies and methods, each competing in the race to make TSC technology a viable competitor in the photovoltaic market. The development of TSC technology is inherently difficult, as transparency (the ability for photons to pass through an object) is intrinsically conflicting with the photovoltaic effect (the ability to absorb incident photons and convert them into electricity).

The development of TSCs is generally approached in two ways. The first is to create a solar cell using extremely thin films on the order of nanometers, meaning as you reduce the thickness of some materials, the transparency of the material increases [2]. In this method, multiple material layers are combined to create a solar cell, similar to the manufacturing process of a traditional silicon based cell. However, by using extremely thin films for each layer the overall transparency of the solar cell can be increased. Many different processes exist both for the fabrication of the conductive film and the deposition of these films on a substrate, each having varying impacts on the overall performance and cost of the solar cell.

The other approach is to utilize transparent materials that naturally allow visible light to pass through, while absorbing light in the ultraviolet (UV) and near infrared (NIR) spectrums, which is then used to generate electricity [2]. This takes advantage of the fact that buildings with glass facades typically already have a coating that filters some of the incident light in the ultraviolet and infrared frequencies to protect people in the building from ultraviolet radiation, and to prevent infrared radiation from excessively heating the building. Instead of throwing this energy away, this type of transparent solar cell allows energy in the invisible wavelengths to not only be captured but converted into usable electricity [3]. Figure 1 shows an example of this technique, where incident light coming in from the left is filtered by multiple material layers which absorb invisible NIR and UV wavelengths and allow wavelengths in the visible spectrum to pass through to the right.

Many of the more promising technologies employ a combination of these two overlying techniques, as the layers used to construct the solar cells are extremely thin which increases their transparency, and select layers are also capable of absorbing NIR and/or UV radiation.  There are a range of different materials capable of this phenomenon, including polymers, perovskites, quantum dots, and transparent luminescent solar concentrators (TLSC) [2]. Additionally, Organic dyes can be used as doping elements, which serve to increase the range of wavelengths and number of photons that are absorbed, and in turn increasing the number of electrons and holes that are produced [2]. This improves the operating efficiency of the solar cell.

An example of the thin-film approach is semi-transparent perovskite, which is composed of multiple extremely thin material layers, giving the cell partial transparency while also having some of the higher efficiencies of existing TSCs [2]. Solar cells that are intentionally only partially transparent are fitting for use in south-facing building windows where it is desirable to filter some of the incident irradiation light – many office spaces use tinted windows in such locations anyways [4]. 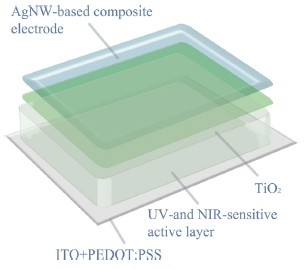 Quantum dots are inorganic semiconductor nanocrystals, having electronic and optical properties that differ from larger particles due to quantum mechanics. When UV radiation is incident on a quantum dot, an electron in the quantum dot is excited to a higher energy level, and when this electron drops back into its valence band it releases energy in the form of a wavelength of light [5]. This emitted wavelength is directed towards the edge of the panel frame and collected by solar cells placed there, converting that energy into electricity. Transparent luminescent solar concentrators (TLSCs) operate on a similar principle - transparent fluorescent dyes absorb incident NIR and UV light and emit visible light, which is again guided to the edge of the panel where solar collectors convert it to electricity [2]. One main difference is that the fluorescent components in TLSCs are composed of organic salts, in contrast to the inorganic nanocrystals used as quantum dots.

Confronted with the difficult challenge of scaling these complex technologies, other individuals have opted to avoid the development of truly transparent solar cells, and have opted for a more readily practical approach: developing solar technologies that can be more immediately integrated into existing architecture (commonly known as Building Integrated Photovoltaics, or BIPV). Some examples of this include solar shingles (one of Tesla’s popular side projects) and solar blinds, both of which apply traditional opaque solar cells in a more aesthetically pleasing manner [4]. These technologies are readily available to residential customers today, and are a great scalable alternative for producing clean electricity if traditional silicon solar panels aren’t desirable or feasible in your particular situation.

The fabrication of the technologies discussed above is quite difficult and involves several challenges that must be balanced to create a feasible design. These include [2]:

TSC technology will continue to improve and become more attractive as these challenges are addressed, and we can expect to see the adoption and application of these technologies increase in the upcoming years. The transparency of TSCs existing today is hovering around 80%, with efficiencies typically falling under 10%, which combined with the cost of manufacturing is still too low to be competitive with traditional silicon based solar cells [2]. While transparent solar cells have much lower efficiencies than traditional solar cells, the abundance of potential applications makes this technology attractive, as it eliminates the issue of land use commonly tied with traditional solar panel installations – their lower efficiencies will be overcompensated for by their large potential scale of deployment [4].

The technologies discussed above are promising, and several companies exist today that are putting these techniques into practice and working towards increasing their scale of production to commercial levels.

SolarWindow has produced a transparent solar cells utilizing a polymer-based coating which is NIR and UV sensitive, and is making big strides in developing economical roll-to-roll manufacturing techniques for polymer based thin-film TSC that could soon bring this technology to the commercial market [6].

Ubiquitous Energy is another company in the transparent solar cell space, utilizing the TLSC technique described above. Their solar cells are in production and available for purchase and installation in limited sizes, and hopefully will be more readily available for commercial applications in the upcoming years [7].

The German company Heliatek, one of the world’s leading manufacturers of organic solar films, has successfully created perovskite solar cells having 40% transparency and 7% efficiency [2].

With the promising trajectory of these technologies and the growing number of companies that are investing serious time and capital into their development, we can optimistically expect that in the not-too-distant future skyscrapers will produce enough electricity to meet their entire electricity demand, personal electronics will have self-charging capabilities, and large industrial cities will not only consume power, but produce it. These technologies will not only serve to make our electrical grid cleaner and better for the environment, but also more independent and resilient.