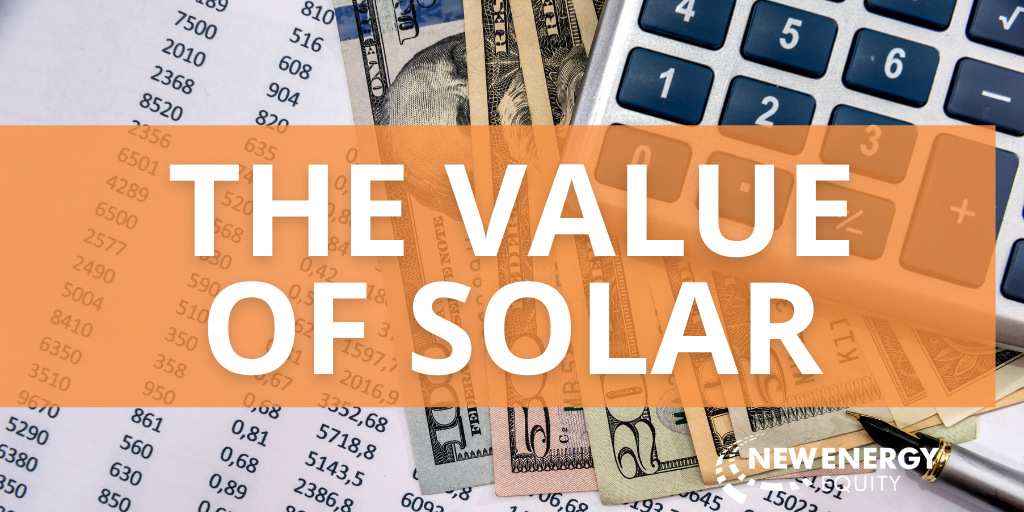 The Value of Solar

President Biden has recently released his Energy Plan which outlines the steps he hopes the United States will take in order to mitigate the worst effects of the Climate Crisis.  While the plan is considered ambitious, this “all of the above” approach is what is needed to reach a 50% reduction in greenhouse gasses by 2030. When it comes to electricity, that means we need to build as much solar, storage, wind, and geothermal as possible. For solar specifically, we need to invest heavily in utility-scale projects and distributed generation projects. Utility-scale solar has been getting a lot of attention on Capitol Hill, but it’s critical that distributed generation is also prioritized if we want to meet the aggressive timelines laid out by the White House. To facilitate this effort, the government must quickly adopt policies at the federal, state, and local levels that promote and support this rapid transformation of our electricity system.

How can policymakers maximize the amount of distributed generation capacity being built each year while minimizing the impact on ratepayers? The answer is a Value of Solar Tariff. Value of Solar Tariffs set a price for solar production designed to reflect the full value that is being created by a solar project.  Minnesota’s Value of Solar tariff and New York’s Value of Distributed Energy Resources (VDER) tariff provide the framework for this policy solution that promises to deliver the most capacity at the lowest cost.

For those unfamiliar with those programs, the Value of Solar Tariff is determined by adding up multiple factors that represent different economic benefits of solar energy, sometimes referred to in the industry as the “value stack”. In Minnesota’s program, the tariff is set by adding:

In New York, the VDER tariff is determined by adding:

New York has also historically given additional value to community solar generation. In both programs, an actual dollar figure is assigned to each benefit created by clean local generation projects.

The Added Value of Distributed Generation

By assigning dollar values to those additional benefits, policymakers and rate designers can accurately reflect the value that distributed renewable energy provides to the grid as a whole, while simultaneously creating a price signal that unlocks billions of dollars of private investment and adds gigawatts of renewable generation capacity to the grid.

The New York and Minnesota programs have proven very successful but there is opportunity for improvement as other states look to adopt this framework. One such improvement to add to the value stack is the obvious yet often overlooked factor of Health Savings. The value of Health Savings will vary by region, but reducing pollution from burning carbon benefits society at large by lowering rates of asthma, respiratory disease, and heart attacks, just to name a few. A recent study by Harvard University estimated more than 8 million premature deaths worldwide are caused by fossil fuel pollution, with over 350,000 occurring in the United States. That is roughly 20% of all deaths in the world. Assigning a Climate Mitigation value to the value stack should also be seriously considered. The past 15 years have given us a sense of just how costly the Climate Crisis can be, due to the impact of hurricanes, floods, droughts, wildfires, heatwaves, deep freezes, blizzards, tornadoes, and insect-borne illnesses. Historically, we have paid an artificially low price for electricity, with the associated costs of climate-related natural disasters externalized, only to be paid by society decades later, often by people who were not the original polluters, such as lower-income and other vulnerable populations. The cost of dealing with natural disasters is rising as they become more intense and more frequent. Rate makers should work with insurance actuaries to estimate the future value created by a clean kilowatt-hour and amortize that value into a Value of Solar tariff.

Policymakers can improve upon Minnesota’s program by following Colorado's lead and increasing the maximum participation size to 5MWac. Increasing the maximum system size will allow for additional economies of scale and will accelerate the interconnection of new renewable generation capacity across the grid. 5MWac projects can be safely installed on the distribution system, while smaller limits will only slow growth.

One benefit that Minnesota’s program includes, and New York’s does not, is a guarantee of projects receiving the Value of Solar tariff at a prescribed rate for 25 years with a fixed rate increase. New York’s rates vary over time which makes the projects more difficult to finance, thus slowing adoption. Minnesota also resets the tariff rate each year (forward only, not retroactively), which allows rate makers to adjust the program to accurately reflect the value being created and modify the program with an eye toward increasing adoption at the lowest possible cost.

Allow All Projects to Participate

Given that distributed renewable energy generation creates value across the grid, and for society at large, all projects under 5MWac should be allowed to participate in Value of Solar programs. Allowing universal participation will accelerate market growth and lead to more geographic diversity among projects. Once a baseline Value of Solar tariff has been established, regulators should then consider creating adders to encourage investment in projects that create additional societal value.

Community Solar as an Added Benefit, Not a Requirement

In order to accelerate the adaptation of distributed solar + storage, it will be critical to work with our state policymakers and Utility Commissions to create Value of Solar tariff programs across the country. Value of Solar tariffs can better reflect the true value of solar production, and they create well-balanced price signals that eliminate uncertainty and lead to rapid growth. It is critical that we all continue to push an "all of the above" approach, but prioritizing distributed generation will help reduce pollution, optimize existing grid infrastructure, and create good-paying local jobs. Minnesota and New York have shown us the way, now it is up to activists, politicians, regulators, business leaders, and ordinary citizens to build on that success and pave the way to a clean energy future.


How Can New Energy Equity Help You Reach Your Solar Goals?