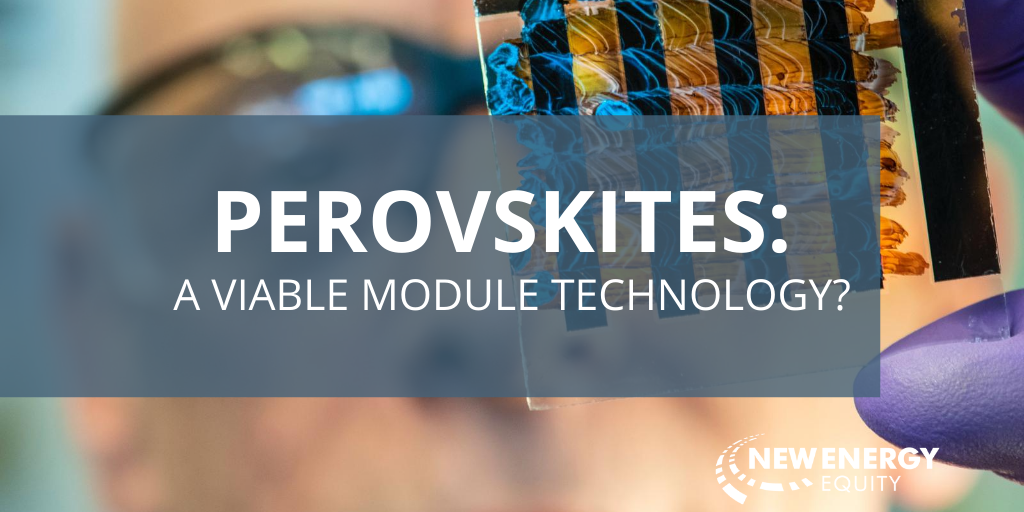 Solar technology has drastically evolved since the first solar cells were invented in the 1800s. Despite being less than 1% efficient —meaning the majority of the solar power collected through the cells was not transformed into usable energy— scientists were still able to experiment with solar cells to power cooking tools, steam engines, water heaters, and more.

In 1954, Bell Labs invented the first useful silicon solar panel, which was 6x more efficient than those first solar cells. Today, most commercial solar panels —typically made from silicon wafers— bolster an 18% efficiency. The significant gains in panel efficiency have contributed to the falling costs of solar panels, and is therefore a worthwhile trend to watch closely, especially considering that panel efficiency will likely continue to rise as researchers get increasingly creative with materials.

One of the most promising solar technologies being developed is perovskites. Perovskites are a highly efficient type of thin-film solar cell made from a perovskite structure compound, typically a hybrid organic-inorganic lead. Despite only ten years of development, perovskites have already reached efficiency levels of 28%, in large part due to their high solar absorption coefficient. Additionally, due to their incredibly thin structure, perovskites have the potential to be applied to a wide range of surfaces, like buildings, cars, boats, and more. The thinness of the panels also means that the panels require limited raw material inputs, which helps explain the technology’s low cost.

Though perovskites have certainly proven themselves in a lab setting, there is progress to be made before the technology can be deployed commercially.

The first setback to be addressed is that the technology contains lead. The lead levels in perovskites panels are minimal, but there may still be opposition to deploying the resource as a result.

Durability Against the Elements

Panel durability is the next significant challenge given the ultra-thin nature of the panel. Perovskites are not thought to withstand the elements as well as silicon panels and are especially vulnerable to moisture and air.

The third challenge is degradation. Since this is a new technology, it is not yet known how quickly the panels will degrade, and how efficiency will be affected.

There is also concern surrounding the scalability of perovskite panels. Efficiency records for perovskites have been set on samples smaller than 1 cm2 and researchers have found it difficult to maintain high efficiency on large area formats because it is harder to produce uniform material coatings on large surfaces.

Despite these hurdles, perovskites are believed to have immense potential for the solar industry. Martin Keller, director of the National Renewable Energy Laboratory (NREL) states that “Perovskites have the potential to become a game-changer for solar and many other fields”. NREL has a comprehensive perovskite program that aims to increase the solar cells’ efficiency and enable scaling for widespread commercial use.

Research spans far beyond NREL. Various research organizations and for-profit entities are investing massive amounts into perovskite technology. Researchers are experimenting with new encapsulation strategies to increase the ability of perovskites to withstand harsh outdoor environments. Companies are exploring different manufacturing processes and some groups are even printing the solar cells on inkjet printers.

Another interesting path forward is the integration of perovskites into standard silicon panels. Researchers at the Clean Energy Institute are working to modify silicon solar cells with perovskite coatings with the aim of commercializing the technology. This sort of tandem panel is around one fifth more efficient than the most efficient commercial panels on the market today. A leading company in this space — Oxford PV — plans to release tandem panels that will be 27% efficient by the end of 2020.

A final advantage of the thin perovskite solar panels is their potential to be used in developing countries. Traveling to rural areas with heavy silicon panels is not always feasible, especially given transportation barriers and limited infrastructure. Not only would thin panels be easier to transport to remote areas, but the panels would be easier to install as well. Increasing energy access in developing countries would lead to economic, health, and education gains.

Even considering the challenges ahead as the industry continues experimenting with this new technology, perovskite research is certainly worth following. Between its increased efficiency, low cost, silicon coupling, and its potential as an addition to existing infrastructure, it is no wonder researchers are actively developing the technology.  The solar industry has historically been innovative and adaptive, which helps explain its 49% growth rate in the past decade. Our industry’s investment —on both the public and the private side— in perovskites is in line with our sector’s creative attitude and will undoubtedly help us increase solar production across the nation.