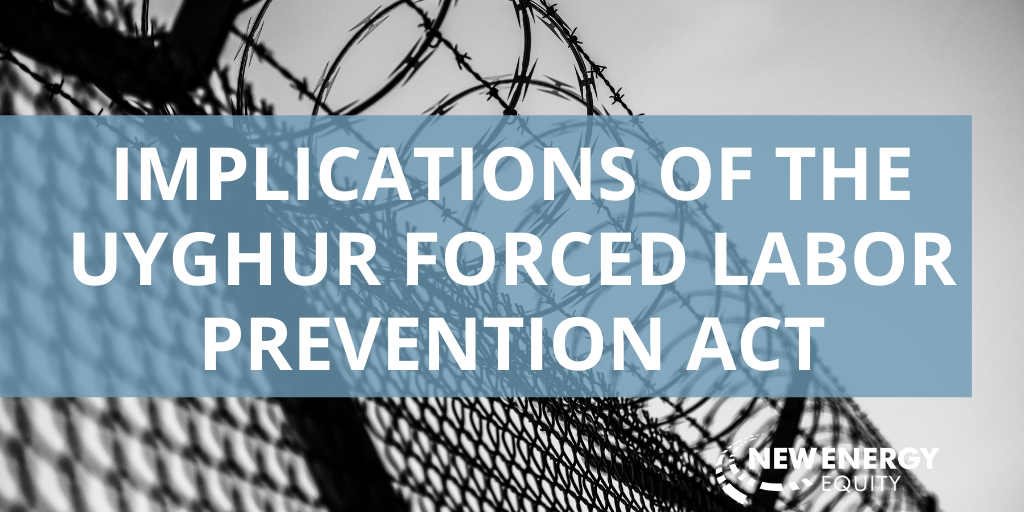 In September, Congress passed the Uyghur Forced Labor Prevention Act (H.R. 6210), a bill prohibiting the import of certain products from Xinjiang, China. Xinjiang is thought to house at least 380 internment camps where various Chinese minorities, like the Uyghurs, are being held1. Prisoners in these camps undergo “re-education”, which is aimed at ensuring prisoners renounce their Muslim faith and avow loyalty to the Chinese Communist Party. Additionally, detainees are used as forced labor in nearby factories, hence Congress’ desire to pass H.R. 6210, a bill created to make sure the U.S. does not import goods manufactured using forced labor. This bill is significant for the solar industry as many polysilicon manufacturing plants are housed in Xinjiang: in 2019, roughly one third of polysilicon the solar industry relied on to make solar panels originated from Xinjiang2. First and foremost, it is important to determine whether forced labor is being used to manufacture solar panels. Second, it is crucial to consider how the Uyghur Forced Labor Prevention Act may affect the ability of U.S. solar developers to import panels from the Xinjiang province.

Given the Chinese government’s unwillingness to admit to the existence of forced labor in the Xinjiang province, it is especially challenging for the solar industry to determine whether forced labor is used in the manufacturing of solar panels originating from the area. The Chinese government restricts independent audits of manufacturing facilities in the province, making them nearly impossible to conduct. There is little published information from any U.S. importers of solar panels or domestic developers regarding their own research into panel supply chains, or substantial reports regarding their efforts to ensure that their supply chains are not linked to labor abuses. If China is operating under this black cloud of secrecy and businesses and consumers are unable to guarantee that forced labor is NOT being used to manufacture solar panels, how should the solar industry proceed?

It’s safe to assume that panel manufacturers in Xinjiang may be using forced labor from nearby internment camps given a) how widely accepted it is that human rights violations are taking place on a massive scale in the Xinjiang province, and b) that it is known that forced labor of the Uyghurs exists. This logic is consistent with statements made by members of the solar industry: John Smirnow, Vice President at the Solar Energy Industries Association (SEIA), stated that SEIA is “strongly encouraging companies to immediately move their supply chains out of the region”3. This statement implies that it is highly likely that polysilicon emerging from Xinjiang is associated with forced labor and human rights abuses. Though the industry is unable to say with certainty that this is the case, the burden of proof should lie with the U.S. solar industry to demonstrate that its supply chain is free of forced labor. Since the industry is unable to do this, the sector should follow SEIA’s advice and seek new sources of polysilicon.

The recently passed Uyghur Forced Labor Prevention Act supports the idea that the burden of proof should lie with U.S. companies to show that imports from the Xinjiang province were made free of forced labor. The bill bans the import of goods made wholly or in part in the province unless the producer can prove that it did not rely on forced labor. SEIA’s stance on the matter aligns with the idea that the burden of proof must lie with manufacturers: in a recent statement given by Ms. Abigail Ross Hopper —the President & CEO of SEIA— Ross Hopper asserted that the industry is not aware of any direct evidence or linkages between the solar supply chain and forced labor practices. Despite that, SEIA recommends that all solar companies move their supply chains out of the Xinjiang region or, if companies rely on imports from the region, verify that the products are being manufactured without forced labor.

The Uyghur Forced Labor Prevention Act will require manufacturers looking to export to the United States to investigate their supply chains and labor practices. Some companies may fail to prove that their supply chains do not rely on forced labor, which will reduce the supply of panels in the U.S. unless manufacturers can quickly move their supply chains outside of the Xinjiang province, where they would no longer have to abide by the standards outlined in the Uyghur Forced Labor Prevention Act. American panel manufacturers should consider bringing supply chains into the U.S., not only to ensure human rights are being upheld, but also to guarantee broader employee protections, like fair wages and equal employment. Beyond the human rights benefits of moving the panel manufacturing process into the United States, creating a domestic supply chain would provide jobs, stimulating the economy at a time of high unemployment and great economic uncertainty.

For those working in the solar industry, here are your calls to action: first, research the source of the products purchased or manufactured by your company and ensure that forced labor is not being used. If you are unable to verify the supply chain or labor practices of your equipment, find a new partner that is based outside of the Xinjiang region. Second, consider having your company sign the Solar Industry Forced Labor Prevention Pledge.

For our industry to maintain its reputation as an entity looking to better the world, it is crucial for our members to pursue equity in every part of our work. We must be able to guarantee that the panels we use to power homes and businesses throughout our nation meet labor standards consistent with those in our country. The Uyghur Forced Labor Prevention Act presents opportunities for our industry to re-think our supply chains and potentially build a domestic polysilicon manufacturing presence. Together, we can seize this opportunity, and as New Energy Equity highlights in our core values, we can “lift as we climb”, “leaving behind a better world”.