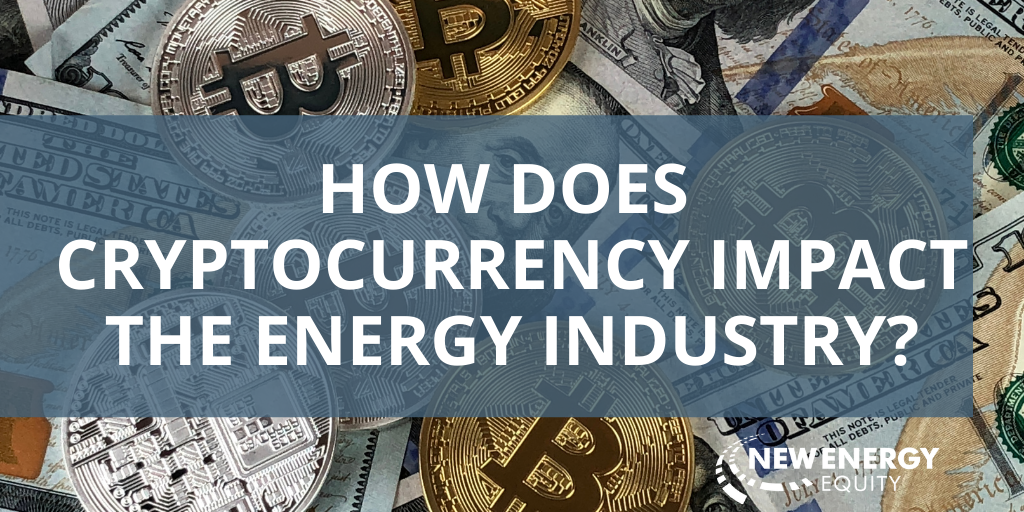 How Does Cryptocurrency Impact The Energy Industry?

Cryptocurrencies have been a hot topic for the past few years and as the popularity and accessibility grows, how will this change the world we live in? While many have considered the potential effects this shift could have on consumer markets, it is imperative that we are aware of the potential consequences a digital currency could have on the energy industry.

Bitcoin was the first cryptocurrency, released as a white paper and open-source software by a mysterious “Satoshi Nakamoto,” whose real identity remains a mystery. While its beginning is tainted by notorious Dark Web transactions, cryptocurrencies like Bitcoin, Ethereum, and even Dogecoin have now exploded into the mainstream consciousness. Cryptocurrencies have several advantages over fiat money (currencies like the US Dollar, the Euro, the Pound, the yuan), such as discretion, elimination of bank fees, very low transaction fees for international payments, and accessibility for users without access to traditional banking or credit systems. While these novel currencies are supposed to be used as just that – money – most retail traders are simply buying and holding these assets like commodities, hoping they will be able to ride the momentum to the top.

Who is Using Cryptocurrency?

Retail traders are not the only ones getting in on the action. Finance companies like Square, PayPal, Visa, and Mastercard have begun moving into the space, allowing customers to perform crypto transactions with their services. Facebook, too, made waves in 2019 when they unveiled their newly created cryptocurrency: Libra. Libra will be usable in any of Facebook’s wide-reaching apps, including WhatsApp, Messenger, Instagram, and of course, Facebook itself. Bear in mind that Facebook has over 2.8 billion users, of which 1.8 billion visit the social network daily. If Facebook users were a country, they would be the most populous country in the world, beating out even China’s 1.4 billion. For comparison, the US sits at around 330 million. 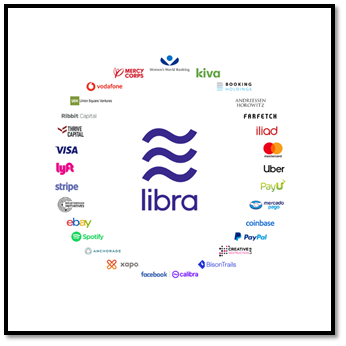 Libra will not be controlled by Facebook, rather a council of founding members to the Libra Association. Decisions will be made via vote.

How Does Cryptocurrency Work?

Cryptocurrency seems to be here to stay, and the mainstream shift to digital forms of currency is not a matter of “if,” but “when.” So how does it work? Bitcoin uses a basic infrastructure called “blockchain.” A blockchain is the cryptocurrency version of a public ledger.

A private ledger is something that anyone can own, such as when a business keeps track of its income and expenses, whether electronically or in an actual handwritten ledger as the name suggests. However, private ledgers require third-party authentication from auditors, rating agencies, bankers, or similar experts. In other words, we must be constantly diligent to the risk of fraud, embezzlement, or theft. As a public ledger, Blockchain technology is not exposed to those risks.

In a blockchain, each person exists within one block, and each block is interconnected with every other block in that public domain. However, this does not mean that the data is publicly viewable because each block is highly encrypted. What it does mean is that the other blocks in the system act as constant validation nodes in the interconnected blockchain. To put it simply, fraud is impossible to commit on a blockchain and enables decentralized, peer-to-peer financial platforms.

Bitcoin itself is created whenever a highly complex puzzle is solved. Bitcoin miners use highly advanced computers to try trillions of guesses per second (called a hash rate), which require astronomical computing power and armies of cooling systems to keep the computers from overheating. Once a solution to one of these complex problems has been discovered, crypto tokens are the reward and also serve as the means of releasing new cryptocurrency into circulation.

How Will Mining Cryptocurrency Affect the Energy Industry? 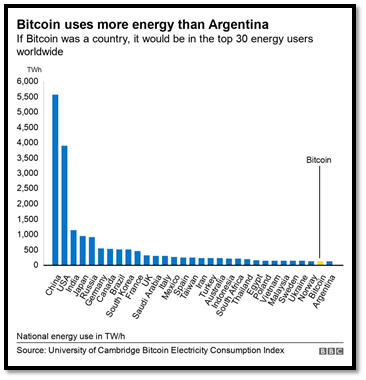 Bitcoin’s energy usage is comparable to that of Argentina.

Bitcoin is an electricity hog. The majority of Bitcoin is mined in China using electricity derived from coal or renewable hydropower. Some experts argue that Bitcoin alone could result in increasing the global average temperature to over 2°C by 2033. Even once all the Bitcoin has been mined – forecasted 2140 – the Bitcoin network will continue to use electricity to validate transactions, using about 630 kWh per transaction. The carbon emissions equivalent would be the same as driving a car about 1,000 miles Not only is the result terrible for the environment, but the inefficiency also decreases the real-world adoption rate of bitcoin as money.

Is all cryptocurrency bad? Perhaps not. The second-largest cryptocurrency in the world today is called Ethereum, and in its next iteration, it will implement a Proof-of-Stake method that is significantly less energy-intensive without sacrificing security. There are some issues still being worked out of this system, but many believe this design difference will allow Ethereum to overtake Bitcoin as king of crypto.

In a white paper put out by Cathie Wood’s ARK Investment Management LLC and Jack Dorsey’s Square Inc., the argument is made that not only will Bitcoin increasingly use renewable sources of energy for mining, but that Bitcoin will be a key enabler of clean energy deployment, as Bitcoin offers a “buyer of last resort.” The paper outlines that the key problem with renewables is their intermittency, providing abundant energy in the daytime and almost none during peak demand.

Their argument is that when bundled together as a triplet, solar + storage + Bitcoin will allow further penetration of renewables than without. There is some validity to this argument as the Duck Curve is a tremendous problem for grid operators. With a massive surplus of solar energy in the middle of the day, the issue arises that the surplus energy goes to waste. In the hours between 5-7 pm, the sun sets while simultaneously demand spikes due to residents returning home and using energy to power their Vs, make dinner, and turn on lights. Grid operators in California, for example, need to keep ~13,000 MW of natural gas peaker plants on standby just to accommodate peak demand every day. This issue limits the economics of solar, especially as PV adoptions increase: grid operators compensate less for excess solar energy in the middle of the day. Solar has eaten coal, solar is eating gas, so perhaps solar will also eat solar.

One obvious solution is to utilize batteries. Batteries can offset excess solar in the day to shave off the “head of the duck” in the evening, but cost continues to be a barrier to wide adoption. According to the white paper, Bitcoin mining offers a constant, flexible, high load that may be used to offset the belly of the duck curve. Hence the term: “Bitcoin as a battery.” 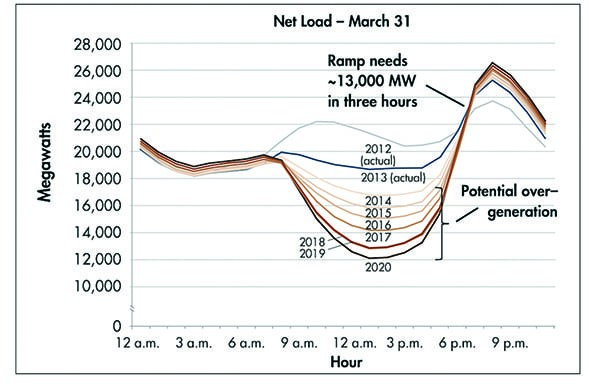 Vast solar energy makes electricity cheap in the middle of the day, but when the sun sets and people return home from work, demand spikes.

More directly, the model backing this whitepaper assumes that solar energy will service grid demand first, and only use surplus solar energy to mine Bitcoin or charge the battery. This assumption is difficult to believe as the economics of mining require servers to run 24/7 to pay off the cost of the equipment. What reason is there to believe that mining farms will only use excess electricity when the sun is shining? Without an enforcement mechanism, Bitcoin is likely to simply use whatever energy is cheapest at the time: solar, gas, or coal.

It remains to be seen if the Bitcoin Clean Energy Investment Initiative (Square and ARK’s new “green bitcoin” group) will focus on policy action or pure market forces to turn this vision into reality. Their audacious statement is controversial, drawing accusations of greenwashing; however, ARK Investment’s CEO Cathie Wood has made a name for herself by betting big on innovation and disrupting the traditionally conservative investment management ecosystem. In 2020, five of her seven ETFs averaged a 141% return on investment. Will she prove the doubters wrong once again? 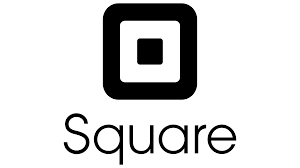 The Bitcoin Clean Energy Investment Initiative is made up of Square, Inc. and ARK Investment Management.

Bitcoin, Ethereum, and other cryptocurrencies have exploded into the mainstream. While these cryptocurrencies promise to bring tremendous economic benefit, they also promise to leave behind a wake of environmental destruction if left unchecked. Companies who are investing heavily into Bitcoin are already creating useful narratives to protect their social license to operate, but is this just lip service? The public must remain critical of any attempts to dismiss Bitcoin’s environmental problem, but perhaps we should give them a small chance to prove good faith.

Are cryptocurrencies a passing fad, or are they here to stay? On balance, are they good or bad for society? Can innovators in the space find a way to wed solar and storage solutions with Bitcoin mining facilities and mitigate environmental concerns? Let us know your thoughts in the comments.

Note: for the purposes of this article, I assume Bitcoin and other cryptocurrencies are here to stay. I attempt to maintain a nuanced, even-handed approach to this controversial new topic.