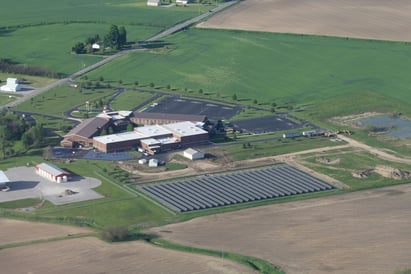 New Energy Equity (NEE), a solar developer and financier based out of Annapolis, MD, collaborated with New Resource Solutions (NRS) and Solscient Energy (Solscient) to complete a 789 kW ground-mounted solar array for Hicksville Public Schools. This solar system is expected to produce more than 30,000 MWh over the life of the project, the energy equivalent of taking over 4,000 cars off the road for a year. The system will be owned by Powell Associates based in Aspen, CO.

The project is part of a series of clean energy transformations made by Hicksville Schools over the past 10 years. “This project is one our district has researched for the past couple years. We are excited to have it up and running and look forward to the substantial savings it will provide the district.” said Keith Countryman, Superintendent.

This system, containing 2,106 solar panels, was constructed by Solscient on previously unused acreage behind the Hicksville Village School. The project area was ideal to use a single-axis tracker racking system to maximize energy production. New Resource Solution’s Marc Palmer explained: “Most solar projects of this size default to using fixed-tilt racking systems, but thanks to the great partners we had in place, single-axis trackers were a better value and permitted a lower power price for the school.” Long term Operations and Maintenance will be provided by New Energy Equity to ensure the project is operating efficiently and maximizing production.

Although years in the making, the actual construction of the system only took a few months. “We are proud to have played a role in this important project for the Hicksville School District.  The efficient timeline of the project’s construction is a testament to how well the district, NEE, NRS and Solscient worked together”, said Granger Souder of Solscient.

“New Energy Equity is excited to support Hicksville Village Schools’ ongoing initiative to increase energy and reduce their carbon footprint within their district, “ says Matthew Hankey, President & CEO of New Energy Equity. “The recent energization of the solar system for the Hicksville School District will not only achieve predictable energy costs for the next 25 years, but also serve as a catalyst in promoting the environmental benefits of solar power energy to Hicksville students and surrounding community.”

Having completed the project just weeks before the 50th anniversary of Earth Day, New Energy Equity and its partners are thrilled to have helped the Hicksville School District celebrate its efforts to save the planet, save energy, and save money.

New Energy Equity has developed over 250MW of distributed generation solar projects and has completed over 40 projects for public and private schools throughout the country. New Energy Equity is proud to provide energy savings to schools across the country and believes solar on schools can help inspire the next generation to think critically about energy use and its implications for the environment.