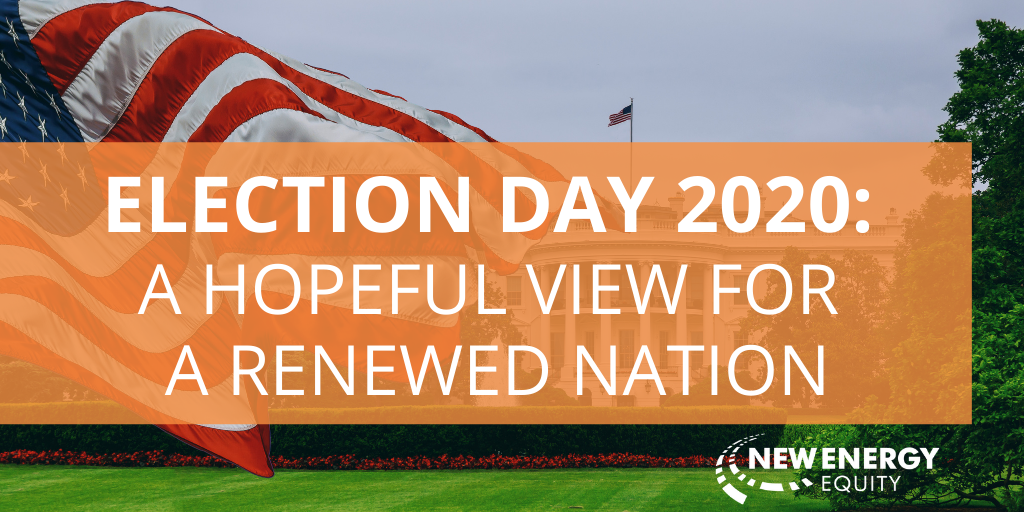 Election Day 2020: A Hopeful View For A Renewed Nation

On the eve of what is undoubtedly the most consequential election in at least three generations, I remain hopeful that the American people will choose a path of optimism and progress. That they will opt for a future based in cooperation and collaboration, where our “enemies” are the many challenges we face collectively, and not one another. That we will once again find a way to talk about our differences rather than to yell about them. But, as an executive in the renewable energy industry, I also have a set of more specific wishes for 2021 and beyond.

First, our economy generally, and renewable energy specifically, have been hampered by degrading infrastructure and policy that is poorly coordinated and unambitious for at least the past 20 years. Look around at the vast changes we have seen during that time – those changes have happened by and large despite policy and infrastructure, not because of them. Imagine the dynamism we could unleash in our economy if the federal government sought to coordinate with state and local governments and if we began to make the long overdue investments that are needed in national infrastructure – not just the traditional roads and bridges – but also the metaphorical bridges, such as G5 infrastructure in rural America, deep investments in STEM education opportunities for low-income urban and rural school districts, and the modernization of the electricity grid. These investments will be the “priming of the pump” and are necessary for our next phase of growth in the US economy as we emerge from the carnage of the COVID-19 recession. I wish that we would set that stage with a combination of inspiration, generosity, creativity and collaboration at all levels.

Second, for renewable energy specifically, I wish we could see a simplification of the Renewable Energy Investment Tax Credit (ITC). Right now, the ITC is declining 4% each year to 22% next year before dropping permanently to 10% in 2022. This reduction has happened too fast, threatening to kill one of the leading job-creating industries of the last decade. 4% per year doesn’t sound like very much, and it has been manageable for the biggest and most profitable companies in our industry. But at New Energy Equity, we work with lots of small local partners and for them this step-down risks shifting a profitable year into a money-losing year. And the drop off in 2022 from 22% to 10% will be seismic, with many companies unable to make it through that transition. Even more significantly, the residential version of the ITC will disappear entirely in 2022, meaning that a homeowner who puts solar on her home in December of 2021 will receive a 22% percent credit for that investment, while her neighbor who waits until January 2022 will receive nothing. How many of her neighbors will simply choose not to make the investment in solar? I wish that the new Congress would recognize the disruption that this hasty transition is causing to this otherwise dynamic area of our economy and revert the ITC to its original 30% level and leave that steady for at least 5 years as the economy seeks new stability after the recession we are living through this year.

Beyond the rate of the ITC, though, I wish that we could structure this incentive more simply. The ITC is structured along the lines of specialized real estate investment tax credits that were developed as part of the 1982 reforms of the US tax code. This structure is complicated, especially with respect to who can claim the ITC. For example, a public school cannot take the ITC because it doesn't pay taxes. The same goes for non-for-profit organizations. Low-income homeowners usually cannot benefit from the ITC because they pay less in federal income taxes than the credit would be worth. Prior to 2013, there was an alternative to the ITC that was a straight cash grant, reimbursable to whomever was making the investment, whatever their status. I wish that Congress would elect to reinstate this cash grant option, making solar available to more of us.

Of course, the simplest way to reform the ITC would be to eliminate it entirely in exchange for eliminating all current subsidies for oil, gas and coal. Solar, wind and geothermal are perfectly able to compete head-to-head with carbon-based fuels, so long as it is on a level playing field. Such a “grand bargain” would eliminate the largest structural impediment to a wholesale transition from dirty to clean energy in the United States. But so long as we are subsidizing these legacy energy sources, whose very product is now threatening our way of life through global warning and the destructive effects of industrial pollution on human health, biodiversity, clean water and food security, we should support clean alternatives at least as vigorously.

Third, I wish that rather than dead-end investments trying to preserve companies in the industries, such as fossil energy extraction, that are contributing to the growing horrors of climate change, Congress and the White House will agree instead to make life-saving investments in the people who work in these industries. We have a dreadful history in this country of allowing companies and entire industries to simply abandon the people responsible for those companies’ success, as soon as employing them no longer suits the companies and their owners. The destruction of those lives and of their communities can be seen across our country in abandoned mill towns, logging towns, rural towns whose Main Streets have withered unrelentingly for 40 years and the hollowed-out centers of industrial cities. They are seen in the explosion of “deaths of despair” – suicides, overdoses and alcohol-related deaths. In 2020, its estimated that over 150,000 of our friends and neighbors died of these causes, more than double the number in 1995. During COVID, these numbers have worsened. The solution has always been available, and when we have chosen it at small scale it has made a huge difference. Job training, relocation assistance, and the portability of health insurance allows people whose jobs are either being eliminated, or no longer providing a bright future, to choose for themselves a new path to economic prosperity and happiness. I wish that Congress would embrace these people and invest in their lives and their communities’ futures.

These are my wishes 24 hours before Election Day: for a renewed America that looks hopefully toward the future, and not fearfully into the past.