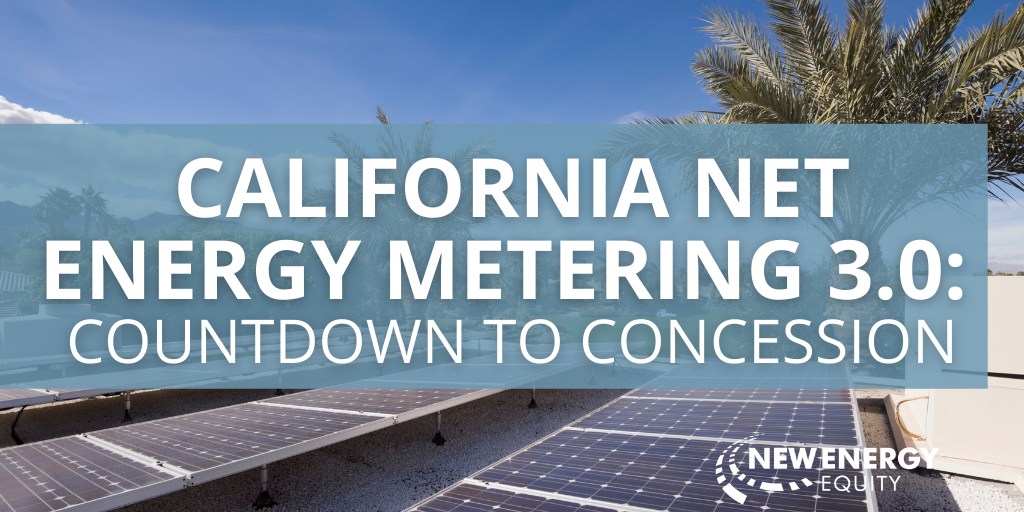 NEM allows systems that have excess generation from a PV system to be exported to the grid, making it essential to the current solar energy market. NEM keeps the owner of the PV system from losing the excess energy generated by the system above the building’s energy needs at any given time. The NEM program allows the utility customer’s meter to “spin backwards” when there is excess generation, and they receive a credit on their account to apply against their utility charges. Under NEM, unused solar power isn’t lost, it’s effectively saved for later.

California is currently operating under its second iteration for NEM, commonly known as NEM 2.0. The PUC’s redesign to NEM 3.0 began in August of 2020 and there has been a range of proposals put forward by various stakeholders. When NEM 2.0 came along, the PUC ruled in 2016 that existing customers would remain under the original program. Many expect existing customers to be shielded from NEM 3.0 changes, but that remains unknown at this time

Proposals put forth by the largest investor-owned utilities in California called for drastic cuts to NEM that would essentially dissolve the benefits that result from the program, lowering the utility account credits for exporting energy. The utilities proposals also call for a monthly charge for using NEM that could wipe out any economic benefit of exporting renewable energy. Under these proposals, all existing and future customers would be migrated onto NEM 3.0 starting in January of 2022, even before the program rules have been fully defined. This would mean that solar customers would not be fully aware of what they’d be signing up for.

What Does NEM 3.0 Mean For New Solar Development?

Pending changes to net metering rules leave developers and EPC companies in the untenable position of generating proposals that could be grossly inaccurate when it comes to modeling the economic benefits of solar. Whether a cash purchase or a Power Purchase Agreement (PPA), not knowing the value of net metering credits leaves companies and customers guessing as to what the real long-term value proposition will be. Customers who have been on the fence are moving forward given the pending changes, and more than a few solar companies are doing their best to create a sense of urgency around the issue.

Developers looking to finance projects will need to move fast to get projects closed and funded before the changes take effect, but to be clear, new or existing projects could still be affected depending on the PUC’s decision. Parties negotiating Power Purchase Agreements will need to consider to what extent changes to net metering rules will need to be contemplated within the agreement terms. Many PPA finance companies have notified development partners that projects hoping to reach commercial operation by the end of the year should be starting the diligence process as soon as possible.

How Are Solar Companies Reacting to NEM 3.0?

Depending on who you ask, the effects of NEM 3.0 range from as drastic as ending the solar industry in California altogether or as minimal as a slight setback. The bottom line is we will not know what the new program will entail until it is finalized. It is possible that the utilities’ starting positions are a negotiating tactic, and if they achieve half of what they propose, they’ll consider their efforts a success. Solar companies are using the upcoming changes to create a sense of urgency to get deals signed and interconnection applications in, though it remains to be seen if customers will be able to secure long-term NEM 2.0 status.

Others are taking the potential changes in stride and see it as more of a setback and less of a total disruption of business. One large solar contractor has been framing the changes to customers as a reset on project economics where projects with a 10-year payback today might push out to 15 years after the changes take effect, but stress that it’s only the best guess until the changes are known.

Another widely agreed-upon result of the changes to NEM is that California will see more PV systems that include an energy storage component. If changes to NEM mean it won’t make sense to export energy, then storage will be the best option for handling excess generation. In a worst-case scenario from the perspective of a solar developer, batteries would be sized appropriately to prevent excess solar power from going to the grid. California currently offers incentives to offset the cost of batteries, though there’s no guarantee how long that incentive will last.

Given the aggressive renewable energy goals California has targeted, it is hard to imagine a complete upending of the solar industry in a state that has led the way in the adoption of renewables. The decision is ultimately up to the PUC and its members have not sent clear signals of which direction they will go. For now, there is no actionable information out there, only a vague sense of urgency to complete projects quickly in the hopes they’ll be able to remain in NEM 2.0 long term.