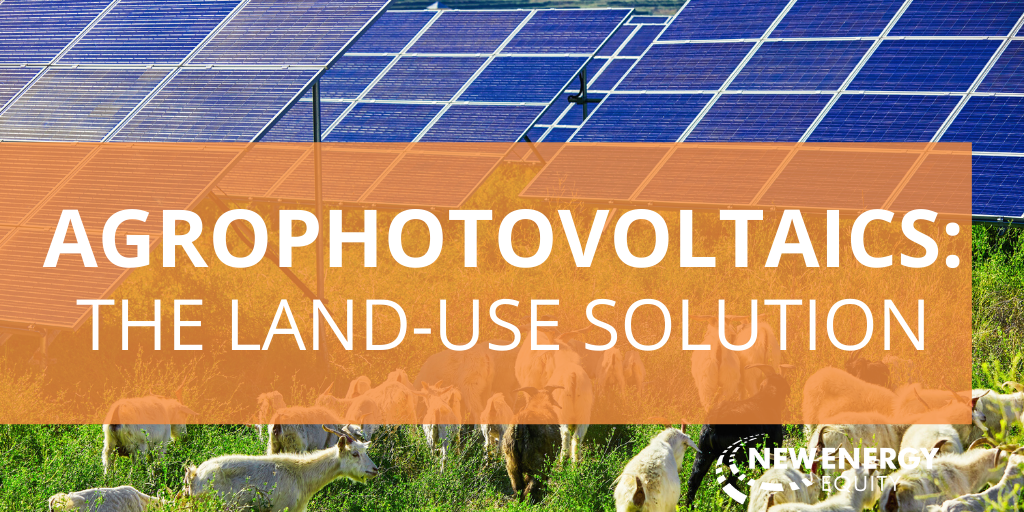 By: Mike Homes and Isha Rege

Large ground mounted solar farms are one of the most common and cost-effective methods of renewable energy production. Solar farms require large amounts of open land, and with solar development rapidly expanding in many areas of the U.S., competition for suitable land has increased significantly. Many rural communities are concerned about conserving land for food production, and solar development is sometimes seen as an adversary to local agriculture [4, 6].

The clean energy transition, including the expansion of solar photovoltaic energy systems, is crucial to advance our society, but it should not pose challenges to something as important as food security. We cannot replace crops with solar farms; we need creative solutions that allow both solar and crops to thrive– hence, agrophotovoltaics!

Agrophotovoltaics (APV), also known as agrivoltaics or solar sharing, is the combination of solar energy systems and agriculture on one piece of land, without diminishing the performance of either system. APV creates a symbiotic relationship between farmers and solar developers, allowing farmers to make full use of available land, while also producing clean, renewable energy for the utility grid. Since the idea was introduced by German physicist Adolf Goetzberger in 1981, thousands of APV systems have been installed worldwide, totaling an estimated capacity of about 2.8 GWp as of January 2021 [7, 8].

There are many options and design considerations when it comes to mainstream solar systems, and APV systems are no exception. Figure 1 below shows an example of an APV system, where PV solar panels are mounted on tall racking structures, providing enough space underneath for crops to receive sufficient sunlight and farm laborers to operate large industrial equipment. Figure 2 shows some of the other components of the design, such as the module row spacing and inclination angle. Farmers can use APV as a stand-alone system combined with energy storage to offset their own electricity use, install larger systems that distribute energy to nearby residential and industrial estates, or send energy directly to their local utility grid. Hybrid systems are also an option, where the farmer’s own electricity demand is met by the installed system and any excess energy is sold to a utility. These options are depicted in Figure 3. There are numerous ways APV incentivizes farmers who want to make their farm more independent from the grid, care about using renewable energy to reduce their carbon footprint, or desire an additional reliable source of income.

Figure 2:Components of an APV system [8].

Figure 3: Various energy use and economic options for APV systems

Just as there exists a wide variety of specializations in farming, APV systems can be quite diverse. In addition to traditional crop production, these systems can be used for raising livestock such as cattle or sheep, or as habitat for pollinators and native plant species [6, 1-3].

According to studies done by the University of Arizona, APV systems that produce crops are significantly impacted by three factors that affect plant growth: air temperatures, direct sunlight and atmospheric demand for water [9]. Compared to a conventional farming setup, the shade provided by solar panels resulted in cooler daytime temperatures, less water loss through transpiration, and higher moisture levels in the air [9]. This means that for plants that are more sensitive to harsh direct sunlight and extreme temperatures, such as tomatoes and various fruits, an APV setup can produce increased yields compared to conventional farming methods [9]. In one study, chiltepin fruit production was three times greater and tomato production was two times greater when combined with an APV system compared to a traditional farm plot [9]. The reduction of exposure to direct sunlight results in less water loss through transpiration and evaporation and thus more efficient irrigation, leading to reduced overall water usage and cost savings [9].

Unique pollinator habitats can be developed for honeybees and native insects at APV facilities [2, 3]. However, it is also important to recognize that pollinator-friendly practices are relatively new to the United States and little research is available concerning best practices in establishing native plants at solar PV facilities.

The best management practices currently being followed are drawn from pollinator, vegetation, and wildlife management guidelines designed for use at other types of facilities such as construction sites. As more solar arrays are designed to be pollinator-friendly, and more research is conducted, we expect to gain a better understanding of how APV facilities can be established and managed to maximize habitat benefits to native plants and wildlife and minimize negative impacts of development. [1]

It is clear that there are many benefits to APV systems. APV systems increase land use efficiency, improve the quality of land over time if best farming practices are used, can provide unique habitats for native species and provide a supplemental income for small farmers who are able to lease their land to solar developers [4, 6]. Additionally, APV designs  increase the efficiency of solar systems. Solar panels are sensitive to temperature and operate less efficiently in high temperatures. The mounting structure of APV systems allows for generous air circulation and plants underneath the panels release water vapor through transpiration, helping absorb heat from the panels, which in turn lowers their operating temperature. By embracing APV systems, farmers are making agriculture more sustainable by supporting renewable energy deployment in its effort to mitigate climate change. APV systems are still in the initial stages of development and there is plenty of scope for technical improvements and further fields of application.

In order for APV systems to become more prominent in the US, it is crucial to determine what additional varieties of crops will perform well with APV systems, how to adapt APV systems to various climates, and whether or not incorporating APV into other types of solar systems, such as rooftops, is practical.

Another important function of APV systems is its role in combating land scarcity, and it’s important to note that APV systems are viable beyond rural areas. The Cochin International airport in India houses a 29 MW array which also incorporates vegetable crops into its design, producing about 60 tons of vegetables annually [5]. In 2015 it became the first airport in the world to be completely powered by solar energy, and proves that APV can be successful in large scale rooftop systems [5]. Thus far, APV systems have been installed in many countries around the world including Germany, France, Japan, the U.S. India, and China, and policies supporting implementation of APV systems were passed in several of these countries in 2017 [5, 8]. In the U.S., some state entities are offering financial incentives for projects that combine solar with vegetable farming as APV gains more recognition in the solar market. The first international conference on APV occurred in August 2020, an attestation that APV is becoming recognized on a global scale [10].

APV will become a crucial practice in the coming years as solar farms’ footprint expands and siting of large-scale solar systems becomes more challenging. Even today, solar farms are usually sited on land that could otherwise be used for crop production. Since large scale solar farming took off in 2010, an increasing number of farmers in the west are willing to lease their lands to solar developers as this can be an easier and more lucrative option for their land use [4].

New Energy Equity is looking forward to getting involved in sustainable solutions and eager to work with new innovative technologies that will help make our planet a better place for the generations to follow. If farmers or developers are interested in pursuing APV opportunities with New Energy Equity, please reach out to info@newenergyequity.com.