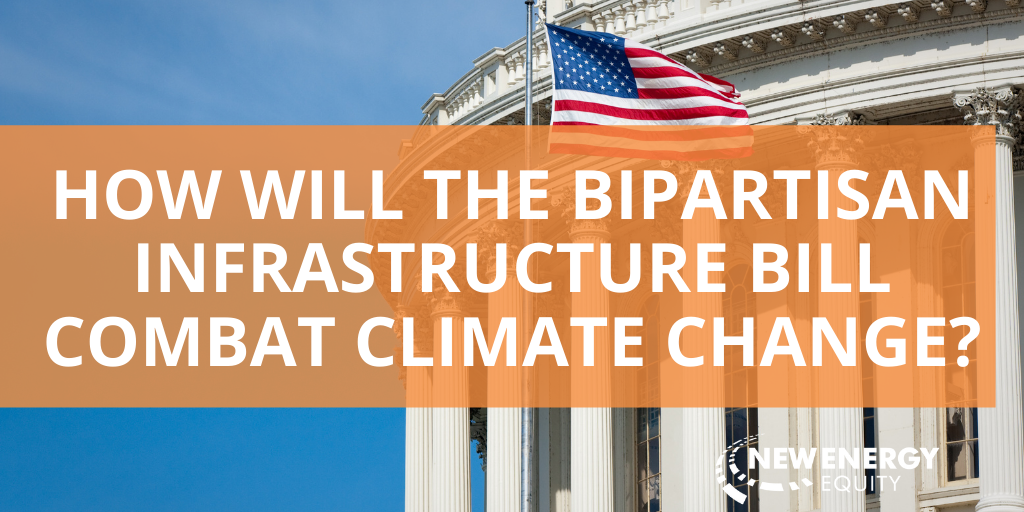 How Will the Bipartisan Infrastructure Bill Combat Climate Change?

When President Joe Biden was victorious in the 2020 United States presidential election, the renewable energy industry drew a collective sigh of relief and felt a general sense of optimism about where the industry was headed. President Biden’s willingness to include climate action as a part of his initial infrastructure proposals made this shared hopefulness seem warranted. Solar developers in particular have been eyeing federal policy changes that could take the adoption and installation of solar energy to new heights.

At the end of June, however, President Joe Biden abandoned his original $2-3 trillion plan, known as the American Jobs Plan introduced in March 2021, which included strong measures to combat climate change and promote the development of the nation’s renewable energy infrastructure. The President has now thrown his support behind pursuing a $1.2 trillion bipartisan infrastructure deal that excludes many vital tactics that would be instrumental to the progress of combatting climate change. Although the American Jobs plan would have been a more comprehensive approach to addressing the climate change dilemma, the President and Democrats in Congress do have plans to advance the climate priorities using a two-pronged approach.

The President and the Democrats in Congress plan to separately introduce legislation of the scaled-down infrastructure plan, in hopes of gathering any possible Republican support. From there, they will then introduce a second set of policy and legislative demands more closely related to climate change that Democrats intend to pass via a reconciliation bill—requiring only a simple majority in the Senate (which the Democrats narrowly hold).

Tax credits and investment will not be a hallmark of the bill.

The federal ITC will continue its planned decline despite widespread support for the most successful renewable energy incentive program in the United States.

Fossil fuels will continue to receive unnecessary and unfair subsidies. The federal government subsidizes fossil fuel companies and keeps their products artificially cheap by disbursing nearly $15 billion every year. By comparison, in 2016 the renewable energy sector (including biofuels) as a whole cost $6.7 billion in U.S. government subsidies.

No creation of the first federal clean energy standard.

President Biden’s original plan was to make electricity generation carbon-free by 2035. Although some states and utilities have implemented Renewable Portfolio Standards—requirements for the percentage of clean energy that must be included in a service territory’s energy mix—this effort has been a patchwork of variable success across the nation. Some areas have not implemented such standards at all and without federal policy mandating a shift to clean energy, will continue to rely exclusively on fossil fuels to generate energy.

No proposal for a carbon tax/trading system.

A carbon tax remains one of the most transformative policies that the government could undertake to ensure companies pay and or commoditize the carbon they produce or sequestrate. This omission is particularly unfortunate given the increasing support for a carbon tax among Republican elected officials at the state and national level and even from many of the largest fossil fuel companies, making a carbon tax the best opportunity for a bi-partisan climate policy.

President Biden’s initial plan provided for $35 billion in clean energy research, development, and deployment. This was removed in its entirety from the bipartisan deal. Investments such as these pushed the cost of solar energy down 90% over the last ten years, with a similar drop in the cost of wind power over similar time periods. Battery storage is now set to make similar gains but requires further R&D support to be as successful.

What Can We Do to Advance These Tactics in The Infrastructure Bill?

With so much at stake, now is the time to reach out to your congressional representatives. Tell the representative how important solving climate change is to you and other like-minded constituents, and that you intend to only vote for candidates that support solving climate change through renewable energy development and other critical policies in our generation so that future generations can flourish. If you work in clean energy or a related field, tell them that your job depends on these programs as well as how many jobs your business has created–especially if you are an owner of the business.